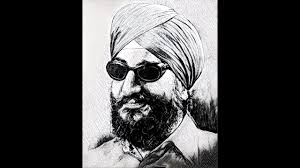 Gopal Singh Jee came from Amritsar was probably an orphan who was brought up in an orphanage in Amritsar and learnt Keertan there. He was very good keertankar and became Hazuri Ragi in Harmander Saheb. Some people from Delhi invited him to come to Delhi and he found employment at Gurudwara Sis Ganj Saheb in Chnadani Chowk, where he did keertan duties regularly. He was transferred to Mata Sundari Gurudwara in what was called Noorjeahn Road area which had government servant living quarters. This area is some where between IP Estate, Ajmeri Gate and New Delhi Railway Stations. Gopal Singh had lost his eyes when he was some three years old probably due to some wrong medication and was assisted by some one to move around. He had some differences(due to his request for undertaking free lance Keertan outside Gurudwaras) with the managemetn of the Delhi Gurudwaras and lost his job and accomodation there. Sikh ladies who used to learn Gurbani Keertan from him supported him during this phase including housing him and providing meals for him in turn in different homes. During his stay in Delhi some young Sikh girl married him and they had a son. After some stay in Delhi following his being removed from Gurudwara job, he moved back to Amritsar, where he passed away after a cardiac arrest.